It's always presented as some sort of obvious solution to a lot of problems, but as Ezra Klein pointed out years ago, term limits would be counterproductive and only increase incentives for corruption. As much as it would be great to have fewer entrenched centers of power (heck, George Washington figured that out), we have a complex world, and we need experienced legislators making laws for it. It also always bears mentioning that we already HAVE term limits - regular elections.

So term limits will never happen because of all that, and because congresscritters would have to voluntarily limit their own power.

Good luck with all that.

Term limits are never really put forth as a solution to the old age problem we definitely have with our elected government, nor the incumbency problem. Things like term limits are almost always proposed as a cure - all for whatever is wrong with our politics on any given day. We throw out term limits usually out of rage at the bigger, more troubling problem of our disconnect with our government that we don't have a simple solution for.

Our Senate (and a lot of the US House) are deeply, hopelessly out of touch. Not to get to into the intergenerational rage aspect of it, but we have dozens of Senators making decisions on behalf of millions of people that they in no way will have to live with. And they're wealthy enough (and our system doesn't deal with nepotism well enough, which is a related issue) that their grandkids won't either. They won't have to deal with climate change, water shortages, the long - term effects of antibiotic overuse, and the sustainability of the Marvel Cinematic Universe. Their incentives are ridiculously out of step with the priorities of the general population.

Yes, even conservative parts of the population.

It's something that - again - is perfectly encapsulated by the Trump phenomenon. We are desperately searching for cure - all policies for more nuanced and complex problems. We shout about things like term limits because our politicians are out of touch. However, the overwhelming problem of our political disconnect is so multifaceted that "term limits" is not only ineffective by itself, but it's a solution that only addresses a fraction of the problem its proponents are trying to solve. 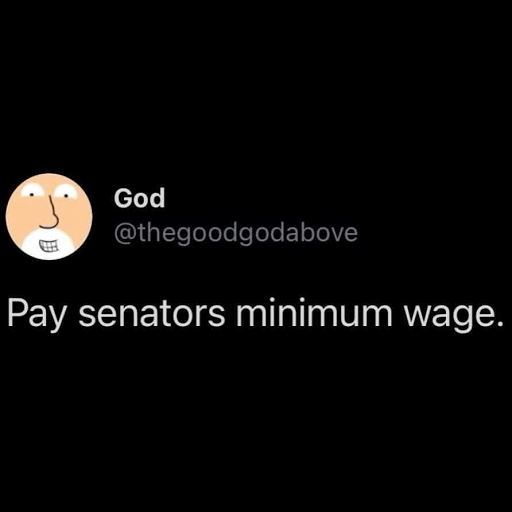 In the same vein, we post silly memes about paying Senators minimum wage because they don't understand what the average person's struggle is. There was - and still is - outrage that politicians getting different healthcare plans than the ones prescribed by the ACA. We think congress getting a raise is somehow meaningful, and celebrate when they cut staff budgets. This quest for "common sense" solutions that do next to nothing to addresss difficult and thorny problems extends to policy, of course.

Politics. Is. Complex. And the idea that anything resembling "common sense" solutions will "fix" the fundamental issues at hand - without tradeoffs - is a fantasy at best. If we can't allow our systems and our solutions to be complex and to be nuanced, we'll just continue to be disappointed.