It was a Republican terrorist attack.

Now, just about every word in that sentence is inflammatory and rude, and probably to an unnecessary degree. But it's important that the proper words be used, because as George Carlin put it, we do think in language.

And this is accurate language.

Republicans committed a terrorist attack on the United States.

It should also be noted that along with being rude, the big flaw in that framework is the same flaw that Republicans encounter when accusing all Muslims of being terrorists. Small, extreme groups who claim to share an affinity with a larger group that contains multitudes do NOT - at all - represent that larger group. There's a degree to which mainstream members of groups should hold their extremists accountable, but at the end of the day, they're just not representative of their outliers. That's why they're outliers.

But there's a fair argument to be made that the the group that attacked the United States Capitol building on January 6 was fairly representative of the mainstream Republican party, and they had the tacit endorsement of that party in spirit, if not a full - on blessing.

So, with those few caveats acknowledged, let's break the accurate language down. 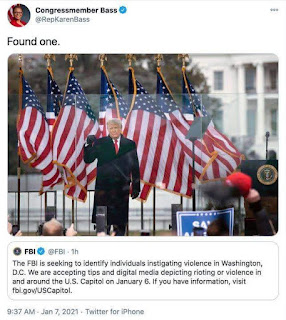 Donald Trump is the leader of the Republican party. We just had an election in which he got 70+ million votes. He has had roughly a 90% approval amongst registered Republicans (it's down to 80% - still a mandate by any metric). And there isn't really a serious argument to be made that he didn't incite a mob to physically attack - not protest, but attack - the US Capitol building. There is video of his top aides (and his children) celebrating the attack. His daughter called the angry mob "patriots" before she got called out for it.

Going down from there, 147 members of the Republican congressional caucus have publicly endorsed the spirit, if not the tone of the January 6 terrorists. By wearing suits and standing in Congress, they may be more articulate than an angry mob, but the pivotal talking point is the same. They all believe that non - existent and / or non - extraordinary election irregularities demand extreme measures. They may be Harvard and Yale lawyers who were not wearing paramilitary gear, but the endorsement of anti - democratic measures based on a conspiracy theory is the same.

One step further down, everyone arrested for the attack so far has been a registered Republican or someone deeply affiliated with Republican groups. And that's before you get into the actual Republican elected officials who were arrested. They were all on board. All were "patriots" with no reservations about the clear "extremists" in their ranks.

This was - at its core - a Republican endorsed, funded, and attended event. At the very least, most Republicans are on board with the event's stated goals. That matters because euphemisms about "Trump supporters" or "extremists" or any claim that the groups that committed an act of terror were somehow unaffiliated, unrelated, or independent is simply... wrong.

We need to reckon with the fascist movement in the United States, and pretending that it begins and ends with a discrete group of outliers ignores that movement's de facto leaders. 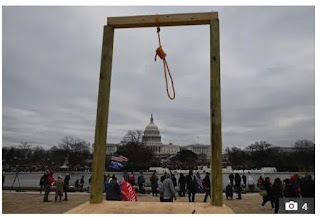 It's a loaded word, I know. But I joked early on during the attack that - not to be too snarky - the people raiding the capitol... didn't seem to have much of a plan aside from terrorizing public officials with political goals in mind.

The popular word seems to be "coup", and that's fair and balanced (to coin a phrase) - they wanted to remove the people who would have power and put the leader they wanted in power. But one thing that irks me that I haven't been able to find a detailed account of - why did they stop? By all accounts the Capitol police where overwhelmed and undermanned, and the fact that someone was able to get to the office of the Speaker of the House suggests that they had the run of the place for awhile. If the goal was "overthrow the government" there doesn't seem to have been much stopping them from continuing with the plan.

Combine that with the fact that most of the videos of the attack feature tomfoolery bordering on shenanigans (aggressive, angry shenanigans, certainly), and it's clear that the goal was to intimidate, not conquer or overthrow. They wanted to harass, and yes - terrorize. Had they tried to bring an infrastructure bill to the House floor, then it could be said that actual governing was part of the plan.

There doesn't seem to be much of an agreement on what to call the events of January 6. "Riot", "mob", "protest" (it wasn't), "insurrection", etc. are all being thrown out as thoughtful, professional people try to get a handle on what happened. But I keep coming back to a few simple words:

Because we're still at war with terrorists, aren't we?