1.)
Super duper credit to whomever said this - if it's not clear by the header image, these posts are mostly therapy, so I'm not linking anything:
"A significant portion of Americans aren't racist, but for a significant portion of Americans, racism isn't a problem."
This is - I think - the challenge of our times. It's not that there are actual a lot of actual robe - wearing Klansmen and Neo-Nazis out there (aside from the newly elected congressboy from the NC-11, who is awful). It's that for millions of us, "racism" isn't really something that enters into people's minds. They're not racist, their friends aren't racist, and "institutional racism" sounds like something from their boring high school history course that MLK already fixed once upon a time.
It's an utterly blinkered and privileged point of view, but "don't be a racist" just bounces right off of it. And "why would you vote for a racist?" just does not compute.
2.)
This was yet another election night that was particularly painful for Floridians. With 90% of the vote in, Biden was leading. Then more votes came in from the panhandle and South Florida, wiping  his lead out. But the odd part was that Florida ALSO became the first state in the south to pass a $15 minimum wage amendment with 61% of the vote.
I'll have a LOT more on that (insane) phenomenon later, but over the last few years Florida has passed amendments limiting the sizes of public school classes, legalizing (some) medical marijuana, and allowing felons to vote. They did those things while almost universally electing Republicans to the governor's office and the US Senate who dogmatically opposed those measures.
What's up with that?
My best idea of a short answer to is that we have a very serious disconnect between "politics" and "policy" to the degree that we VOTE based on the PEOPLE we want to LEAD us instead of the POLICY we want to see implemented. It's a total disconnect that leads to weird stuff like people thinking that Trump actually did something about NAFTA and is (LOLs) the "law and order" candidate.
3.)

Candidate quality matters.
Contra # 2 a bit, having individuals that people actually want to vote for is t an underrated mover for swing voters. It sounds almost like high school politics, but actually LIKING candidates as individuals is important. Someone who is good at speaking extemporaneously, cleverly, and discuss issues like... a normal human is a real asset. Nominate someone boring, stiff, or awkward, and it shows. Both Democratic and Republican benches are loaded with people good at raising money. And being charismatic and authentic isn't intrinsic to that. Winning over voters is.
If Biden eventually wins (still not tempting the wrath right now), it's something of a miracle that he beat someone as authentic (if deranged) as Trump.
4.)
I can't quite wrap my head around the fact that the Trump campaign laid out their strategy in detail and in public before the actual election. If they were behind, they would sue to contest the results. If they are behind after mail - in ballots are counted, sue to contest the results. Basically, if they ended up behind, the move was to go to the courts and try to get Republican judges (call them what they are) to invalidate the election.
Step 2: ???
Step 3: ... Govern as a legitimate president? How would that work?
5.)
I have nothing to say about the (theoretical) shift in Hispanic voters towards the GOP. They are not a monolithic voting bloc, and the three white guys who were talking about it on TV news sounded like absolute goons.

But I'm still thinking that the growth (and shrinking) of various demographics - just pick one - bodes well for progressive ideas and Democrats more generally in the longer term.
6.)
If Biden is "officially" declared the winner (by whatever metric you want to use), his message shouldn't change even a little bit. Count all the votes. Democrats often sacrifice the moral high ground for quaint concepts like "civility". In this case, the right thing may seem a bit... intense, but it's also the right thing. People voted and those votes should count.
And just about every Democrat I've read today agrees - count all the votes, even if Trump is declared the winner.
There is a very real - and what should be a very telling - asymmetry to the fact that Trump and his cult want to stop the counting of votes... whenever he says so and whenever he's declared the winner. Anything else is fraud. It's as childish as it is anti-American (that sounds hyperbolic, but I'm going with it). 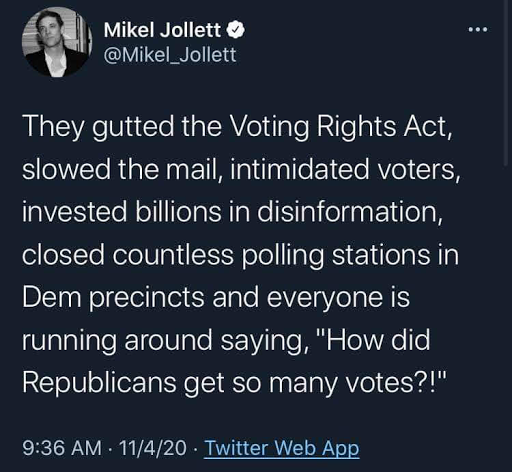 7.)
I still stand by the analysis that policy minutia had little to no effect on the electoral outcome. We have a very serious issue with voters projecting their policy preferences onto candidates instead of understanding their positions.
And that foreshadows the biggest problem of (at least) the next two years. The US Senate appears likely to remain one of the most ridiculous, undemocratic, and impenetrable institutions in the world. They will do nothing to help a President Biden pass ANY bills. And Democrats "winning" the 2020 elections means that we're in for a crippled economy, a surging pandemic, and federal agencies packed to bursting with Republican political operatives. Democrats will take full blame for all of that, and when policy "x" doesn't come to pass, Biden will have "broken his promise". And when Senate Republicans (still) won't touch House - passed bills, it will be Democrats who refused compromise.
Obstruction and destruction are just way too easy for a shameless, conscienceless party to pull off.
So why would Joe Biden even want this job?
2020 Biden Conservatives democracy Democrats Elections Judges Liberals Media Political Parties Political Science Senate undecided voters