We have a very real and pervasive problem with guilt - by association in our politics. It was the main driver of down ticket Democratic losses in 2020 (IMHO), and it more than likely cost Joe Biden Florida. And it needs to be reckoned with.

It sort of… breaks things that if a particular politician meets with, agrees with, looks like, or even dares to belong to the same party as another politician, that they can be saddled with that entirely different person’s entirely different positions. Not only will any tenuous association be made into campaign ads, but it actually beggars belief that it… works.

The fact that Alexandria Ocasio Cortez and Joe Biden both have a “D” after their name does not make them the same person. And it’s crystal clear that drawing an imaginary connection between two such disparate points can lead to problems, particularly when (what should be) local races get nationalized.

If you’re a moderate politician running in a moderate to conservative district in, say, Oklahoma, but you co - sponsor an Ocasio Cortez sponsored bill to rename a post office in Brooklyn, congratulations! You’re now a Democratic Socialist. And it easily gets to silly levels. Let’s say that you’re being attacked by ads in your little Oklahoma congressional district that prominently - and successfully - feature Bernie Sanders. Even though Sanders is a Senator who represents a state that is 2,000 miles away and has maybe spoken to you once. How does it track that he’s your “ally”? Oh, and you can’t entirely disavow or denigrate Sanders either, lest he alienate loyal members of the left who are already begrudgingly supporting your more moderate campaign.

This is a problem.

Relatedly, what Nancy Pelosi is doing on a daily basis doesn’t - and shouldn’t - concern the 99% of Americans who have no say in her re - election or even her re - election as House Speaker. Fair - she’s the leader of the party in the House, but does that mean that the other 200 individual, living, thinking people in her caucus must share her every position? Poppycock. A bigger issue, perhaps, but it’s part and parcel of the “person x is badwrong, and you’re badwrong for your association with them” personalization of politics almost to the level of celebrity gossip. 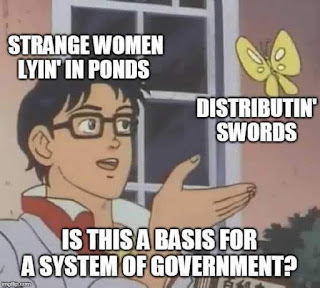 The one point - one - that makes any of that make sense is the fact that partisans almost always vote with their co - partisans. Elect someone with a “D” after their name, they will vote for what we’ve designated in the simple (stupid) binary as “D” policies. Which is - unto itself - a very un democratic (small d) dynamic in need of fixing.

This is another one of those deep, almost elemental problems that I don’t really see a solution for.

The idea behind a representative democracy is that a bunch of us have gotten together to choose a representative for us in our government. The fact that a different group of people selected a different representative that we happen to not approve of shouldn’t effect our decision one iota. Who… cares if a district in San Francisco chooses Lefty McSocialist while a bright red area in Alabama chooses Jesus McGunguy? Why should that decision drive MY vote in MY district?

I don't have time to consider that. I'm busy. 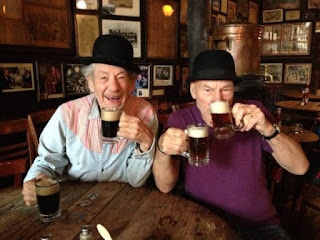