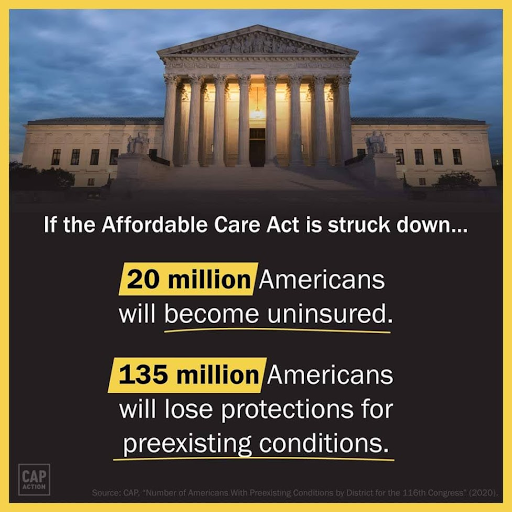 Missing in the "if Barrett is appointed to the court, the ACA is doomed, doomed, I say" argument is the fact that the American health care system is still a privately run enterprise.

I know that we're 10 years after the passing of the ACA, but despite the (loud) protests of the right about "socialism", we still have the only privately - run, for profit health insurance system in the developed world. It's terrible, it's exploitative, and it's maybe the only reason that conservatives have been (marginally) successful at ginning up rage at "Obamacare".

It remains absurd that we still have a multi - billion dollar industry specifically making profits off of NOT giving people medicine.

So that being said (again!), if the protections of the ACA are struck down, it won't be because the president picked the first female name off of a list from the Federalist Society, or because of conscienceless GOP Senators, or because their powers combined put a religious fanatic on the Supreme Court. It will be because private companies - as they are in fact, contractually obligated to do - will take full advantage of what's legal, and kick people with pre-existing conditions off of their insurance plans to increase their profits. If the ACA is struck down, that is what can happen, but it's still a decision for private companies to make. Because that's the utterly amoral system that the ACA did little to nothing to put an end to.

Private health insurers should be noted right alongside of - if not at the top of - the list of villains in this story.

But that fact kind of begs the next question - unlike Obergefell and Roe, the McConnell Senate has already tried and failed to repeal the ACA, and even made it a priority. They're not really afraid to make themselves the villain. Some Senators even seem to take a perverse pride in it - sort of like Thanos, but without the illusion that they're helping people.

They don't think they need the Supreme Court to insulate themselves from the backlash of an ACA repeal. So... what's the plan when it happens via judicial fiat and 20 million people lose their care (even if that's a slight embellishment)?As much as I'd like to think that Republicans would have an electoral backlash for their sabotage, what would likely happen is another decade of Democrats trying to fix things. And when they come close to fixing things, they lose a lot of elections when they get blamed for the inevitable trade-offs.

Because much as we like to mock the Trump administration for their continually two weeks away healthcare plan, there simply isn't a scheme out there that will actually (this is key) help people get healthcare without at the very least ONE very un-conservative component. It should be more embarrassing for them to admit after 10 years, but the ACA IS the least Dickensian conservative healthcare system. They quite simply don't have an answer that doesn't leave tens of millions of people uninsured and private companies absolutely sucking up trillions of dollars that could be used for anything else.

It's not a good look.

So there's a fairly good chance that the GOP will end up as the dog that caught the car if / when the ACA gets overturned. But they may not suffer the electoral fallout from it. Because (not to tempt the wrath from high atop the thing), they are going to lose an election badly in the next few weeks and leave Democrats holding the bag.

None of that is - at all - to say either that the ACA is a good law, or that it shouldn't be shot down in court irrespective of the harm it will cause. But Democrats wanting "socialism" and Republicans trying to "take away your healthcare" almost seem like diversions from the private companies who are actually running our backwards, awful system. They acquiesced when the ACA was being negotiated, took credit for the things when it went right, and were happy to let Democrats hold the bag when things went wrong. It's Cigna, United, and Blue Cross that are in the driver's seat, and if the law suddenly says that they can drop 20 million clients, they'll do it.

And they won't get any blame for it - because it's too valuable as a cudgel for both Democrats and Republicans to use against each other.