Climate Change and the Republican Voter

With five named storms in the Atlantic, most of the west coast on fire, and record temperatures everywhere, “science doesn’t know” is falling so far out of the discourse that it doesn’t even merit attention at all except as a punchline. To “not believe in climate change” is to not believe in gravity.

We know that there will always be a group of wealthy elites that will resist changes to the status quo for pragmatic reasons - they’re contractually obligated by shareholders to do so. But the continued banishment of “climate change is a hoax” from the discourse begs the question of what to do about the rank - and - file climate change deniers who are quickly joining the flat earthers in ignominy.

The two primary conservative objections to action on climate change take two tracts - economic and cultural. The economic question has been debunked too many ways to count. No, reallocating public resources and attention away from fossil fuels and towards renewable energy will not collapse the economy. That never really made much sense, but economics is a fairly easy issue on which to confuse the public. So it’s not surprising that pseudo - intellectualism is the order of the day. 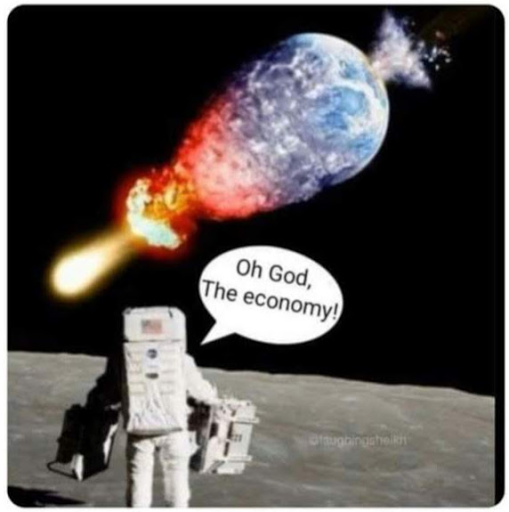 The second and arguably much more powerful conservative argument against any kind of climate action is cultural. And that’s not so much an argument, but a feeling. That’s why they derp around with nonsense like “banning hamburgers” and accuse anything resembling domestic environmentalism as being “pro - China”. There is a surplus of cultural panic and xenophobia among the GOP base that is easily manipulated.

But putting the intellectual justifications (such as they are) for conservative anti - environmentalism aside, their collective objections just shouldn’t be as elementally persuasive as they sometimes are. That we should, in 2020, stop digging up goop out of the ground and setting it on fire to make energy should be an easy sell. Forget about goofy selling points like “foreign oil” and “green jobs”, the anachronism of our fossil fuel usage in the age of AI, smartphones, and bioengineering couldn’t be clearer. Despite technical advances in every aspect of modern life, the energy production’s stagnant coal / oil / gas obsession should set off a big red flag to anyone wedded to anything like the idea of the “free market” producing innovation.

In fact, I’d go as far to say that the current status of our energy producing economy, and conservatives’ protection of its stagnation gives the lie to the idea that conservatism gives a damn at all about the ideology itself. It’s an ideology of convenience - whether that convenience is defined as an entirely negotiable set of principles or the convenience of gas - powered cars.

So back to the big question - even with influential people working against any kind of climate action, what can be done about the regular folks who support them?

Depressingly, the only answer I have is the one that seems to have been adopted by our traditional media - exclude them from the conversation entirely. And that’s kind of a shame. For all the contempt I have for conservatism, every political philosophy needs opposition, even the generic “good government” liberalism that just broadly demands following science and protecting the public.