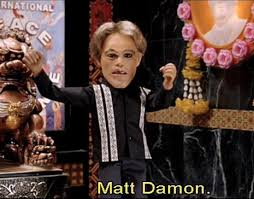 When it comes to “cancel culture”, I think a lot about Matt Damon. Really.

A few years ago, Damon gave an awkward statement seemingly in defense of sexual harassers. A few years before that, he said some deeply stupid things about diversity  in regards to his “Project Greenlight” series. But he, unlike a lot of other public figures, hasn't really been subject to much “cancelling” by the public or the broader entertainment industry.

I’d argue that the reason for that is that there really wasn’t enough evidence to create a full fledged narrative around those mostly isolated incidents, and ample, persuasive evidence that Damon seemed to be decent enough guy from Bah - ston who may have made mistakes, but generally wanted to do the right thing (or maybe he had a PR team dedicated to make it SEEM like he was a decent guy and they just did a very good job).

Which brings us to the narrative of Donald Trump’s contempt for US soldiers and public service in general. 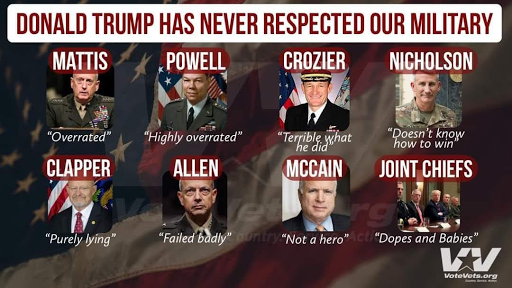 Just about every article on the subject makes a point of Trump’s contempt for John McCain, Khizr Kahn, and Alexander Vindman. We have - regardless of the veracity of the Atlantic article that seems to have galvanized the narrative - plenty of anecdotal, easily available evidence that Trump doesn’t regard the concept of public service very highly (to be charitable). So even considering that his followers are basically a cult at this point, we have the first elements of what could result in a serious blow to Trump’s broader public standing (such as it is), and amongst a particularly important demographic. Hence the administration’s panicked denials and deflections about the story. There is - simply put - a lot of anecdotal evidence to successfully forge a narrative around a truly outrageous idea.

Trump doesn’t support the troops. That’s sort of a locked - in narrative now that is difficult to dislodge.

And we can ask Hillary Clinton how hard it is to dislodge a narrative this close to an election.

Back in 2016, when the various specious allegations against Hillary Clinton were flying fast and furious, there were attempts by Democrats to counter - program and counter - narrative against them. It simply didn’t work. “Emails!” had too many salacious details, too many discrete ad hoc leaks, and seemingly a new angle to the story with each passing day. The details of that (and how we now know it was a coordinated Russian disinformation campaign) have been laid out ad nauseum, but it’s worth noting that the broader “Hillary is corrupt” as a narrative was nearly impossible to shoot down. And that narrative parallels pretty directly with the current “losers and suckers” narrative about Trump. It’s outrageous and easy to dismiss, but not so easily derailed entirely.

The influence hierarchy that I’m dancing around here looks something like this: anecdote < data < narrative. One story doesn’t really have all that much impact. A story backed by research and data can have a fair amount of influence - a “bombshell”, if you will. But both can fall to the wayside in the presence of a solid narrative. Once a narrative is firmly in place, stories counter to that narrative tend to bounce off it like bullets off of Superman.

And civilians should be wary of that. We think in anecdote, but eventually, anecdotes blur together to create reality. And the narrative of that reality can be “Matt Damon is a good guy” regardless of a lot of other conflicting information, and “Trump hates soldiers” can be just as true as well. And if you’re paying any kind of attention, reality is rarely that simple. Except that Donald Trump really probably does think soldiers are losers and suckers. That seems to be fairly straightforward.