As much as super clever internet people like to think that “news” is what’s on the internet, millions of people still get daily news they trust from anchors that live in their town. It's all about trust in the local news on their TV. It’s mostly a benign personality - based phenomenon, but even without malefactors like Sinclair Media pushing propaganda, it’s still a dynamic that is ripe for exploitation. And local news overall paints a picture of a surreal world in ways that are far more dangerous than Fox News does.

It's been a complaint of mine for years that while newspapers still hold to the "story on page 1, retraction on page 36" standard, local news has a "story at the top of the hour, retraction almost never" standard. Gruesome news stories lead the hour, every hour, and then get little to no follow up. It looks like this:

Then... something, something... verdict. Sometimes. There are higher priorities, after all. 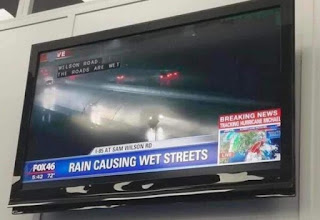 The nightly stories are almost always in that order and each one is treated with declining intensity. Crime (!) always leads newscasts and always gets primacy of place with urgent “breaking!” coverage while boring things like people getting out of prison after they are acquitted, and arrested people being released without charges come later, and quietly, if at all. And even when one of those stories is featured, the original urgency of inciting incident is a distant memory. It's a big contributor to people thinking that “crime” is a far bigger problem than it is. And it’s ripe for exploitation by people looking to exploit people’s unfounded fears.

If you look at the conservative obsession with crime (!), and cynical operatives’ usage of fear of crime through local news, it all makes a sort of twisted sense. If you’re a local news viewer - crime is not only rampant, but the worst crimes imaginable are almost commonplace. And while people are inundated with “a crime has been committed!” stories without the closure of the “criminal caught” and / or “suspect acquitted” news stories, their anxiety is heightened into irrationality.

That's all I really got as to why anyone would think any politician of any type would be "pro - crime".

But inasmuch as I don’t think Trumpian "law and order" shouting has much of an overall effect, and certainly won’t determine the 2020 outcome, it is a little frightening how primed so many people are to think that pedophiles and monsters are around every corner when crime is at near - historic lows. It’s almost as if the very idea of “de - escalation” in any sense - whether it be with the US military, police forces, or average civilians is almost impossible.

People believe deeply in their local news broadcasts, and that belief is often very well founded - as much as people like to complain, when their weather forecaster says there's going to be rain, there's quite often rain. When they say there's traffic, there's traffic. And when the BIG breaking story is a shooting, a murder, or a missing child, the story is given trust that only heightens its proximity and its frequency biases.

And I don't see this problem going away any time soon.